Home » National News » Fireplaces of the Rich and Famous

Fireplaces of the Rich and Famous 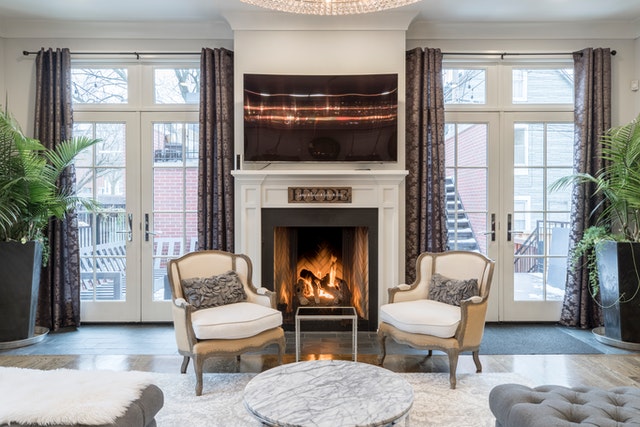 Few things feel as luxurious as the warmth of a beautifully burning open fire. And while gas and electric heating might be more convenient for modern lifestyles, it certainly doesn’t feel anywhere near as special as using good old firewood.

The rich and famous have enjoyed relaxing in front of beautiful fires throughout the centuries. Like fine art and exquisite silverware, Having a beautifully-finished marble fireplace was one of the primary ways in which illustrious aristocrats and wealthy industrialists showcases their wealth.

While today’s open fires have very little in common with those used centuries ago, being much more energy-efficient and clean-burning, the connection between the rich and beautiful open fires lives on to this very day. Although heating your home with kiln dried logs will cost you just a fraction of what you’d pay for gas or electric heat, it still carries with it the connotation of old money prestige.

In honour of the recent Arctic chill that saw temperatures drop to as low as -4°C in some parts of Britain, we’ve compiled a list of celebrities who have the most beautiful wood stoves, log burners, and open fires.

Like all successful open fire projects, Lisa Faulkner’s fireplace design is striking in its effortless simplicity. In her home, the black open fire is framed by a stunning white marble surround with a beautiful hand-carved finish that is impossible to ignore.

Lisa then went on to decorate her open fire with family photos, a clock, and various other accessories to make it feel less anonymous. A white mirror that matches the marble finish of the open fire makes the living room feel even larger than it is.

Being one of Gok Wan’s many friends comes with many perks, one of the best of which is getting to see and enjoy the interiors of his absolutely gorgeous (and absolutely expensive) London home.

Judging by his Instagram, his London home’s living room is especially beautiful. The bold, artistically decorated walls create a warm atmosphere. And the simple yet breathtaking black fireplace gives off an air of luxury, opulence, and class.

It does without saying that the Spice Girls were undoubtedly the 1990s most thrilling and influential girl band. But Geri Halliwell is so much more than just a former Spice Girl. She had several other successful ventures since the group’s heyday, most recently becoming a children’s book author).

During a recently Spice Girls reunion at one of Geri’s many country homes, Ginger Spice gave fans a glimpse into her tastefully-furnished living space.

The home has a lovely rustic aesthetic, which is best showcased by her stunningly cosy living room. Her tasteful open fire succeeds as one of the key pieces by enhancing the look without drawing too much attention to itself.

If you ask us, Masterchef star Gregg Wallace has probably the cosiest living rooms in Britain. And there’s no debating this.

The beautiful wood burner is surrounded by red brick, which further enhances the rustic feel. Carefully arranged around the burner are firewood logs that, at least to our eyes, look like they had been seasoned at home. James Bond wouldn’t look out of place sitting in front of this wood burner setup, so we’re giving it a 10 out of 10 rating.

Factors to consider before choosing your marina management system

Rapper Kanye West has reportedly had four lawyers on the divorce case - but they have all withdrawn from the...

Claire Pulfrey, 38, a single mum-of-three from Grimsby, has seen her prepay electricity meter costs go from £10 a week...

Liverpool head into Saturday's Champions League clash as favourites, however there's an element of their game that continues to be...

If you’re looking for your specific dietary requirements to be catered for at a dinner party, then you should probably...

Factors to consider before choosing your marina management system

Solihull Police Find Over £3,000 Of Stolen Goods Inside Vehicle